Plant Germplasm and Issues with its Global Distribution

The global exchange of plant genetic resources, also known as plant germplasm, is assuming ever more importance as crop diversity is increasingly needed to develop new crop varieties to cope with climate change and other challenges. This extensive transboundary movement of germplasm calls for an effective mechanism of “germplasm phytosanitation,” so that national genebanks can ensure pest-free conservation and supply of germplasm and importers can avoid new and destructive pests entering their territory.

Germplasm is usually considered research material and is thus not subject to the World Trade Organization. Therefore, its Sanitary and Phytosanitary (SPS) Agreement is not very relevant for germplasm movement, though indirectly its provisions may be helpful for quarantine officials for certain activities related to germplasm health. There are about 40 International Standards for Phytosanitary Measures (ISPMs) brought out by the International Plant Protection Convention (IPPC), but there are no ISPMs specifically directed at the transboundary movement of germplasm. In light of this, the national plant quarantine facilities of many countries, when importing germplasm, either follow their own specific norms or those prescribed for quarantine of commercial plant samples, which is not ideal. This means that the distribution of germplasm is often delayed substantially, thus impacting research and the development of new crop varieties.

The crop diversity in CGIAR’s international genebanks continues to be in great demand. That’s music to the ears of genebank managers, who naturally want to see their carefully conserved collections put to good use. But it also places great pressure on them to ensure that only clean and healthy material is distributed.

“Spreading seed-transmitted pests and pathogens is a major risk associated with germplasm delivery to end-users around the world,” said Lava Kumar, a virologist who doubles as Head of the Germplasm Health Unit at the International Institute of Tropical Agriculture (IITA). “Movement across borders can spread all types of nasty things, like bacteria, fungi, insects, nematodes, phytoplasma, viruses and viroids. For plants as well as people.”

That means the international genebanks need robust ways to ensure that only pest-free seeds are transported across borders. That’s the job of the Germplasm Health Units (GHUs), which participate, along with the genebanks, in the CGIAR Genebank Platform. Together with their partners, they are developing a special protocol called GreenPass, which guarantees that best practices are used at all stages of handling a seed transfer. GreenPass provides the confidence that countries need to let germplasm cross borders, instead of suspecting every package is infected until proven otherwise.

From the genebank to users

“The success of the CGIAR crop improvement efforts addressing the United Nations’ Zero Hunger goal depends on the unrestricted flow of germplasm from its genebanks and breeding programs to national and international programs all around the world,” said Charlotte Lusty, the CGIAR Genebank Platform Coordinator. The 11 CGIAR genebanks distribute on average about 100,000 germplasm samples per year to more than 100 countries for research, breeding, characterization and evaluation.

With all that germplasm being sent around the world, there’s an inherent risk of new pests being spread to importing countries. Such events can have a devastating impact, destroying agricultural systems and disrupting fragile ecosystems. It has happened before. High-impact pathogens like banana bunchy top virus and maize chlorotic mottle virus were accidentally introduced to Africa and spread quickly, causing severe crop losses. These two foreign pests have established themselves on the continent and are almost impossible to eradicate.

To minimize this risk, national plant protection organizations (NPPOs) either adopt the International Standards for Phytosanitary Measures (ISPMs) developed by the International Plant Protection Convention (IPPC) for dealing with commercial consignments of plants, or develop their own norms and embody them in national legislation. GHUs help CGIAR centers comply with these regulations.

“The GHUs act as gateways for the safe exchange of germplasm from CGIAR centers to users,” said Lava. “They work closely with NPPOs to provide phytosanitary services to clients within CGIAR and outside.”

GHUs use the best available protocols for germplasm health assurance at all stages from germination to seed harvest, cleaning and dispatch. They test material for all pests reported to occur in a given crop. Batches not meeting the required standards are withheld from distribution and efforts put in place to establish clean stocks.

Even if germplasm is free of relevant pests, however, that doesn’t always mean it will necessarily get to its intended users quickly. “Swift delivery of germplasm is vital for research and development programs,” said Lava. “Delays in delivery can result in the loss of a cropping season or deterioration in seed viability.”

Typically, international germplasm export follows the steps shown in the figure below.

Processing times at each stage can vary widely. “Many times, things just don’t happen quickly enough, and the delivery gets held up,” said Lava. “The processing time for post-entry inspection of germplasm and release to the user, for example, can take anywhere between a couple of days to several weeks, depending on the crop and country.”

These delays can be due to many reasons. There can be difficulties in fulfilling import permits, pest lists may not be not available, ad hoc changes in phytosanitary procedures might occur or redundant checks of certified seed upon arrival might be required. 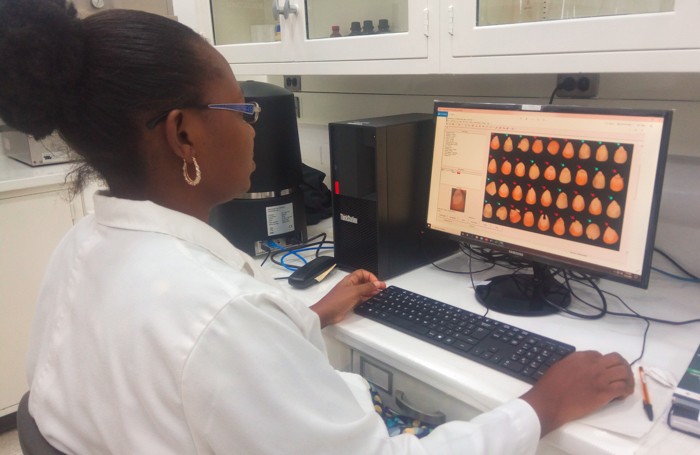 “We liken it to the green lane in airport customs; if you have nothing to declare, you pass through quickly,” Lava said. “Or perhaps you’ve been to an airport in the United States and seen some people whisk through the security check in the “TSA Pre” lane. That gives you an idea of how GreenPass will work.” TSA Pre is a program to expedite the movement of pre-approved passengers through security, exempting them from certain inspections. In a similar way, NPPOs can expedite the clearance of plant material originating from GreenPass-accredited facilities.

“Basically, GreenPass is intended to be a quality assurance system that proves the best procedures have been used for germplasm production and health assurance, while maintaining transparency in risk assessment and mitigation strategies,” said Lava.

CGIAR genebanks are already using the best available procedures, such as next generation sequencing technologies, to establish pest-free material for long-term conservation and facilitate ready dispatch to users. As of 2019, nearly 80% of the of germplasm conserved in genebanks had been tested and confirmed free of quarantine pests and was available for immediate distribution. Untested and unclean materials are never sent anywhere. The GreenPass will aim to recognize this important principle.

GHUs have started consultations about GreenPass with NPPOs, FAO, IPPC, the International Seed Federation (ISF), and the Asia-Pacific Association of Agricultural Research Institutions (APPARI). The collaboration and guidance of these international partners are crucial for the development of the GreenPass framework.

“GreenPass has parallels to the Multilateral System of access and benefit sharing created by the Plant Treaty, which facilitates the exchange of germplasm for agricultural research and breeding using a standard materials transfer agreement, or SMTA,” said Michael Halewood, one of the coordinators of the Policy Module of the Genebank Platform. “The agreements the CGIAR centers have with the Plant Treaty under its Article 15 have allowed the international genebanks to get in on the deal. GreenPass reinforces the effort to encourage and promote the availability of crop diversity for crop improvement programs around the world.”

“The development and ultimate approval of such an accreditation system doesn’t happen overnight,” said Lava. “The IPPC community needed several years to develop the ISPM 38 standards for international seed movement. We’re hopeful of getting good support and international consensus and approval by the NPPOs and IPPC for GreenPass protocol in the next couple of years. The need is urgent.”

GHUs and IYPH
The United Nations has declared 2020 as the International Year of Plant Health (IYPH). For about 50 years, the CGIAR GHUs have been playing an important role in delivering healthy germplasm to end-users through its mission “securing the pathway of food security” and at the forefront of preventing transboundary spread of pests critical to avoid the devastating impact of pests on food security, livelihoods and biodiversity. The GHU mission addresses the five key messages of the IYPH 2020.