In CIMMYT Mexico, ‘Rules and Regulations for the Safe Movement of wheat and maize germplasm’ have been described by Dr. M. Mezzalama, Head of Seed Health Laboratory (SHL).

Since 1988 the CIMMYT SHL has been officially authorized by DGSV (Direccion General de Sanidad Vegetal) to carry out the quarantine procedures on seed introductions coming into Mexico and CIMMYT, and in April 2007 the SHL obtained accreditation under standard ISO/IEC 17025: 2005, “General requirements for testing and calibration laboratories”, as required by the Mexican government. An official DGSV inspector is assigned exclusively to CIMMYT to assist with thorough and timely seed inspection and importation.

All seed brought into CIMMYT, without exception, must be subjected to quarantine procedures in the Seed Health Laboratory. The seed introduction procedure at CIMMYT Headquarters is summarized  health flow chart 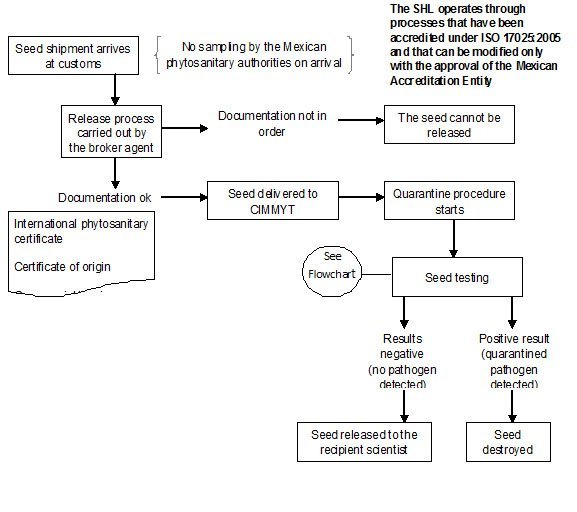 The pathogen detection and identification flowchart is described below: 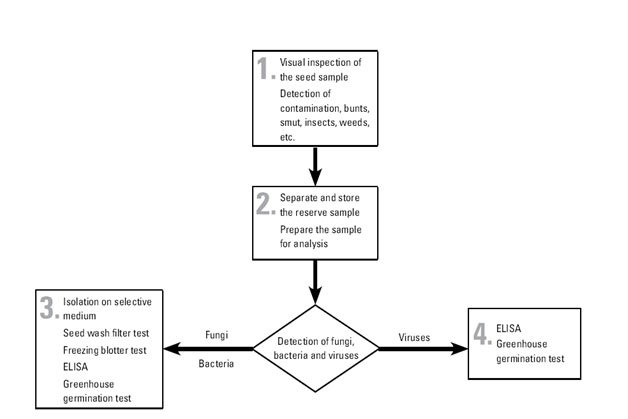 All wheat and triticale seed, both entering and leaving CIMMYT, must pass through the seed health laboratory. All seed undergoes the same set of testing procedures, although the key target pathogens vary between incoming and outgoing seed depending on relevant quarantine regulations. There is a zero tolerance for Karnal bunt teliospores and very strict procedures are followed for moving seed within Mexico from Karnal bunt-contaminated to Karnal bunt-free areas.

CIMMYT generally uses well-established test procedures that may be found in any standard reference on seed health. The filter wash test is somewhat specialized, and the procedure are given in CIMMYT Seed Health Manual.

The tests used in CIMMYT are as follows:

Seed healt testing on wheat and triticale at CIMMYT